Following the successful completion and subsequent announcement of their self-built aircraft, the 20 South African teenage inventors have taken the first of many steps towards accomplishing their goal of flying across the continent of Africa. 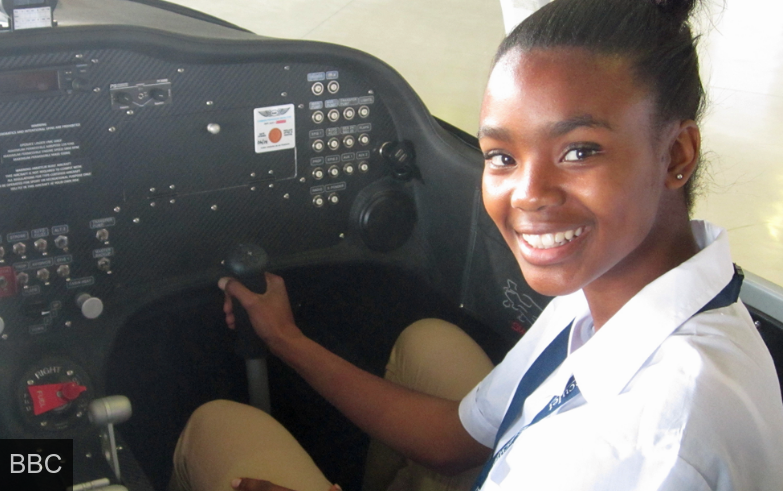 They have successfully been able to get the aircraft into the air and made their first trip to the southern coastal town of Luderitz, Namibia, 1128km away. The overall target is to fly to Cairo, Egypt (12,000km or 7,455 miles away) but this will be done over a period of six weeks.

The plane, assembled by the team comprising of teens from various backgrounds, has a six-and-a-half hour flying range.

Piloted by 17-year-old Megan Werner, who is also the founder U Dream Global, the aviation outreach initiative that supported the teens in building the craft, she expressed great pride in the achievements of these young inventors, reports the BBC.

“It flies so smoothly and the views were breathtaking,” she said of its maiden voyage from Johannesburg to Cape Town ahead of the official start of the trip.

Agnes Keamogetswe Seemela is a 15-year-old from the Munsiville township in Gauteng province who described how she feels about this feat as “Looking at the plane, I am so proud of myself, I can’t believe what we’ve done. I feel like this is my baby. I cherish her.”

The 15-year-old said she hoped her efforts would inspire others like her. “At first, people in my community were shocked – they didn’t believe me when I told them I helped build a plane which we will be flying from Cape Town to Cairo,” she said.

“But now they’re actually very proud of me.”

From Luderitz, their next stop will be Windhoek, Victoria Falls, Likoma, Zanzibar, Arusha, Nairobi, Lalibela, Asmara, Aswan and then Cairo, all in that order.

However, on their return journey, the team will take a completely different route which will include stops in Uganda, Rwanda, Zambia and Botswana.

A support Sling 4 plane flown by professional pilots will accompany the teen flyers, who said they planned to do motivational talks for other teenagers along the way.

This, however, is not the first time young people across Africa have taken initiatives to build aircrafts and fly across the continent, a thing that only until recently wasn’t a common manufacturing comfort zone for Africans.

In a 2018 Face2FaceAfrica report, Patricia Mawuli-Porter, West Africa’s only female flight instructor taught girls and young people in Ghana and in the United States how to build aircraft.

She was invited to the Experimental Aircraft Association AirVenture fly-in in Oshkosh, Wisconsin twice and on one occasion, she helped a young team of young Americans with no prior aircraft building experience to assemble a Zenith CH750 aircraft in a record one week.

“There are a lot of young people (who), when they see me, (are given) hope. It motivates them to learn harder because they believe women actually have something ahead of them,” she said.

Mawuli-Porter is the co-founder of now-defunct Medicine On The Move, (MoM), a local NGO that worked together with the Aviation Academy to transport doctors, deliver medical supplies and services, as well as health education to rural communities across the length and breadth of Ghana

Airbus bribery scandal: What you need to know about Ghana in the \'stinking\' deal

Here\'s why EgyptAir suspended flights to China to avoid coronavirus