RwandAir’s inaugural flight to China touches down at Guangzhou airport

RwandAir’s Airbus A330 touched down at Guangzhou Baiyun International Airport at around 10:30p.m local time (4:30p.m Rwandan time) to a big welcome, completing the national carrier’s longest ever commercial flight.

The 14 hours and 50 minute-flight started from Kigali International Airport at 00:52a.m yesterday, marking the airline’s first commercial flight to China.

Upon arrival at Baiyun International Airport, the wide-body airliner received a big welcome as is tradition for inaugural flights to new destinations.

“Hello from #Guangzhou! Our inaugural flight has landed at Guangzhou Baiyun International Airport,” the airline said in a tweet this evening. 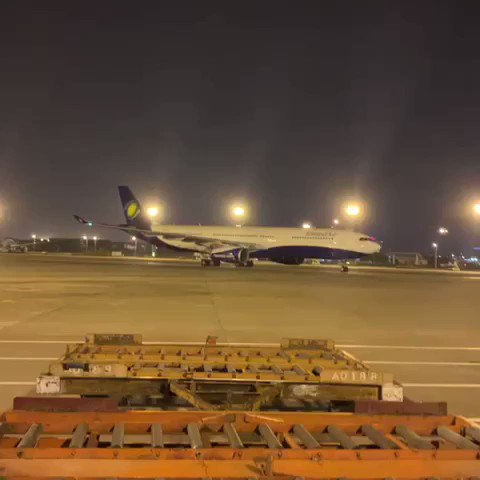 Ahead of departure at Kigali International Airport Monday night, it was all smiles as excited officials and passengers beamed and basked in the historic moment.

The inaugural flight had been fully booked several hours ahead of take-off. Guangzhou becomes RwandAir’s third destination on the Asian continent after Dubai and Mumbai, and 28th overall.

The flights to China’s third largest city – which will be operated by Airbus A330 – will be transiting through Mumbai in India.

The flights will be operated three times a week: Tuesdays, Thursdays and Saturdays.

Kigali-Guangzhou is one of the three new routes Rwanda’s national carrier had planned to open in a space of three months having already launched flights to DR Congo’s capital of Kinshasa. The third is Kigali-Tel Aviv which is expected to be launched on June 26.

A port city northwest of Hong Kong on the Pearl River, Guangzou is one of the major shopping destinations for merchants and is known for popular tourist attractions such as the iconic Canton Tower and Guangzhou Chimelong Tourist Resort.

Speaking to The New Times on Monday, Zhang Wenping, the director of the political section at the Chinese Embassy in Rwanda, said the flights will make travel between the two countries shorter and more convenient.

“It has been taking up to 24 hours to travel from Kigali to Guangzhou, but the new route will reduce this time,” she said.

She added that RwandAir’s flights will make it easier for Chinese and Rwandan businesses and tourists to travel either direction, thus boosting economic activity between the two countries.

In July last year Rwanda signed a raft of agreements with Beijing during Chinese President Xi Jinping’s state visit to Rwanda – the first visit to the central African nation by any Chinese Head of State – to step up bilateral ties across various sectors, including civil aviation transport.

The development is expected to boost Rwanda’s reputation as a top investment destination, with Chinese companies initiating more than 21 projects, worth US$420 million (about Rwf363.5 billion), between 2006 and 2008, according to Rwandan government official figures.

Benjamin Gasamagera, formerly head of Rwanda Private Sector Federation, is one of the Rwandan traders who deal in goods imported from China.

He told The New Times that the Kigali-Guangzhou flights will make it easier for people like him to travel and do business between the two countries.

“This is exciting for us because some of the biggest problems we have been facing recently are delays and cancellation of flights. There was no predictability of our travels and this was hurting business,” he said.

Airbus bribery scandal: What you need to know about Ghana in the \'stinking\' deal

Here\'s why EgyptAir suspended flights to China to avoid coronavirus