GCAA issues a statement on the KLM bird strike incident

The Ghana Civil Aviation Authority (GCAA) has issued a statement with regard to the KLM bird strike incident which occurred on Friday, 3rd September 2021 at the the Kotoka International Airport, Accra.

A KLM Royal Dutch Airlines Flight KL 590 was forced to reject its take-off run from the Kotoka International Airport following a bird strike close to the Boeing 777-300ER’s windshield. The flight was headed for Amsterdam when the incident occurred at 2235 hours GMT – the statement said.

According to the statement, “It is expected that in the event of a rejected take-off, the strong braking action of an aircraft could cause the overheating of its brakes, which may further cause fire and deflation of tyres. Therefore, in compliance with Ghana Civil Aviation (Aerodrome) Directives, personnel of the Rescue and Fire Fighting Service (RFFS) of the Ghana Airports Company Limited (GACL) were immediately deployed to the scene.”

From the statement, the aircraft was towed to the ramp, where all 402 passengers and crew members on board were disembarked. There was no casualties involved from both crew and passengers. 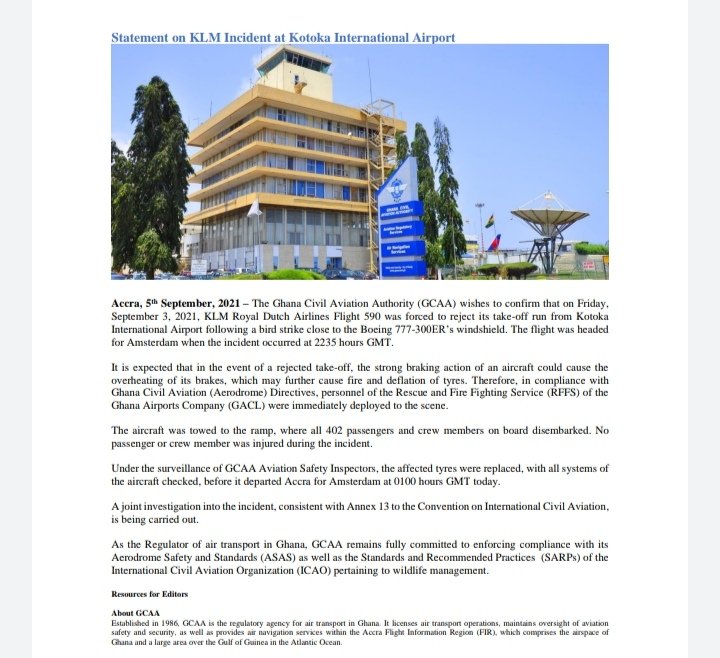 GCAA Aviation Safety Inspectors surveyed the replacement of the affected tires and made sure that all the systems of the aircraft were checked before the aircraft departed Accra for Amsterdam at 0100 hours GMT today the 5th of September, 2021.

A joint investigation into the incident, consistent with Annex 13 to the Convention on International Civil Aviation, is being carried out. As the Regulator of air transport in Ghana, GCAA remains fully committed to enforcing compliance with its Aerodrome Safety and Standards (ASAS) as well as the Standards and Recommended Practices (SARPs) of the International Civil Aviation Organization (ICAO) pertaining to wildlife management. 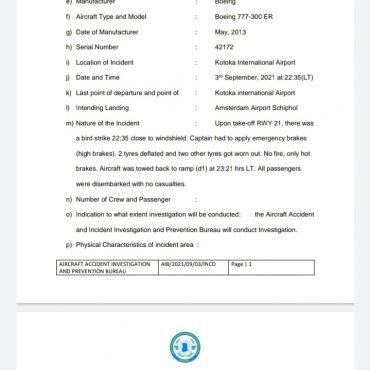 The Aircraft Accident Investigation and Prevention Bureau has been notified of an aircraft incident that occurred at the Kotoka International Airport due a bird strike incident involving a Boeing 777-300 ER aircraft belonging to the KLM Royal Dutch Airlines. Upon takeoff on runway 21, a Royal Dutch Airlines (KLM) flight (KL590) bound for Amsterdam from Accra aborted takeoff  at the Kotoka International Airport (KIA) on the 3rd September, 2021 due […]